Cannon PR has long-established links with the brewery and real ale community; a factor that made us the first choice for a syndicate of beer-lovers when they were looking for assistance to launch their new business venture. 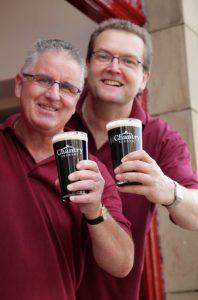 Last summer brothers Mick and Kevin Warburton, both co-directors of Parkgate-based Chantry Brewery, along with friend and Real Ale enthusiast Paul Vernon, took the opportunity of fulfilling a lifelong dream of setting up and running their own pub after purchasing the former Prince of Wales Feathers, in Rotherham town centre.

They had the beer, refurbished the premises and even decided on a name change, but the new pub needed one important thing – customers!

As a Rotherham-based business, Cannon PR were more than aware of Westgate’s rich pub history.

It was only as we carried out further research for the launch and investigated further the pub’s new name – The New York Tavern, that we realised the close connections between the Feather’s and the town’s original New York Tavern, a pub which had been demolished in the early 1970s.

Our work helped to successfully raise awareness of the new venture, generating significant local and regional media coverage, as well as helping the pub to establish a presence on a number of social media channels.

The New York Tavern has been an unmitigated success, with Cannon PR successfully generating significant results for the pub’s launch and even helped to reunite the new owners of the pub with the daughters of one of the pubs former landlords, who were given the honour of pulling the first pints on opening night! Customer numbers have been strong since its launch and already it has been shortlisted for the ‘Pub of the Season’ by Rotherham CAMRA; a unique campaign for a business with a unique history.

Some of the coverage attained during the campaign: