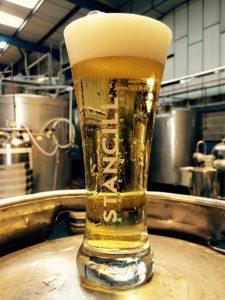 How we helped to launch Sheffield’s first pilsner

With 400 unique beers available across Sheffield’s pubs and local breweries producing more than 1,000 different ales each year, the Steel City has forged a formidable reputation as being the UK’s beer capital for some time.

Despite being responsible for producing an eye-watering variety of ales, enjoyed by imbibers across the world, one area of the beer market has been largely overlooked: Lager.

When Stancill Brewery decided to set the record straight once and for all, the popular brewery called upon Cannon PR’s expertise and knowledge of the brewing sector to launch the new drink.

The opening of Stancill Brewery back in 2013 has become the stuff of folklore and legend. The Stancill Brewery story began when friends Thomas Gill and Adam Hague, launched audacious bid to prevent the legendary Barnsley Bitter – a beer which had been in production since the 1850s from being consigned to the history books forever.

When Barnsley’s Oakwell Brewery, which had served South Yorkshire for more than a century closed its doors, the entrepreneurial duo made their move. Within a matter of days the entrepreneurial duo had secured Oakwell’s brewing equipment (all ten tonnes of it!) which had been destined for a date with the scrap man, secured the keys to new premises, and within a matter of weeks, Barnsley Bitter went back into production. A year later it was crowned as Yorkshire’s champion bitter.

Despite the success the brewery was enjoying, it was keen not rest on its laurels. Having inherited lager producing equipment from Oakwell, Stancill Brewery decided to put the equipment to good use and the brewery called upon Cannon PR for help to launch their new drink.

Beer and lager use the same base ingredients of malt, hops, yeast and water, but the main difference relates to how beers and lagers are fermented, a process which helps to give the drinks their flavour and alcoholic strength. Lagers are fermented over a longer period of time and at a cooler temperature than beer, a process known as lagering.

One of the difficulties associated with producing lager is the filtration and carbonation applied to the drink, which requires specialist equipment to produce.

After spending nearly a year perfecting their new beer recipe, Stancill’s 5% Pilsner-style lager was ready for its launch.

From a PR perspective, breweries launching a new beer don’t tend to generate big headlines. Quirky beer names and unusual ingredients can sometimes raise an eyebrow, but generally speaking it has to be pretty unusual. Stancill’s Pilsner was a traditional 5% lager, packed with flavour – but from a media perspective, it could very easily have been seen as just another beer.

With lots of different breweries competing for similar headlines, not just in Sheffield but across the UK, we knew a different approach was needed.

From day one, Stancill Brewery had positioned itself in the market as being a producer of quality beers, grounded in traditional brewing values. We therefore felt for the story to resonate, it needed to be positioned, not simply as a new product launch, but a continuation of the innovation which has driven Sheffield’s brewing industry for centuries.

We knew no other brewery in Sheffield was producing lager: As mentioned lager productions requires different types of kit to cope with the longer brewing process and filtration. But was this really the very first home-developed lager from the steel city?

If we could justify the claim, we knew we had the basis of a very strong media story. If we couldn’t then a different approach would be needed. A lot hinged on the research to determine whether the claim could be verified.

Although the history of Sheffield’s breweries is fairly well documented, largely due to the efforts of the dedicated members of Sheffield CAMRA, lager production in the city is less well documented. Whitbread, Bass Charrington, Stones and Wards all brewed in Sheffield, with some producing lagers from the 1960s onwards, and to our surprise, our research not only verified Stancill’s claim, but also revealed a curious fact which acted as a catalyst for Britain’s Lager love affair.

The first lager to be produced in Britain has its origins back in the early nineteenth century, but  until the 1950s lager was seldom seen inside Britain’s pubs. When it was available it was typically sold in bottles, accounting for just 1% of all beer sales.

However, that began to change when a deal was brokered between the now defunct Hope & Anchor brewery,  which was and a Canadian beer producer company which saw a little known keg lager introduced into the UK for the first time.

The beer was called Carling Black Label, the Canadian recipe was exported to Sheffield and lager production began. We even discovered the first pub in the UK to sell lager on draught could be found within the city.

From a PR perspective, the research helped to verify Stancill’s claim. The beer produced was a genuine first for Sheffield: Something which would resonate with the brewery’s key local and regional media titles, but also offered a chance to put the unique beer on the national map.

Our primary media targets were the regional press, however, we felt the nature of the story was capable of generating headlines beyond the boundaries of South Yorkshire, and felt it provided a golden opportunity to showcase the innovative work being undertaken by Sheffield’s brewing industry to a broader audience.

As a result of the coverage achieved, needless to say Stancill’s Pilsner was soon in high demand. So much so that as a result of the new orders secured, the brewery expanded its lager production and also launched a 4% variation of the Pilsner, which it branded Stancill Lager.

“We’ve worked with the Cannon PR team for a number of years and have always been impressed with their approach. The work they produce has always been creative, well researched and helped us to distinguish ourselves within a competitive marketplace. Today, Stancill Pilsner is one of our best selling products.

“The launch of Stancill Pilsner was a particularly memorable piece of work: One which not only helped us to secure media coverage beyond what we thought possible, but also contributed to an explosion in demand for the drink.”

Of course, imitation is always the best form of flattery. Since Stancill Brewery launched Sheffield’s first lager, many other breweries have followed them. Find out more about Stancill Brewery’s range here.